The most popular tour in Iceland is the Golden Circle tour — but did you know that we have another tour called the Silver Circle tour? I joined this tour with Activity Icelandin a huge modified super jeep — the most luxurious super jeep in which I have ever been driven. Tom Cruise, Ben Stiller, Sean Penn and Dennis Quaid have all been driven around in this super jeep while they were filming in Iceland. They had been sitting precisely in my seat on this tour. 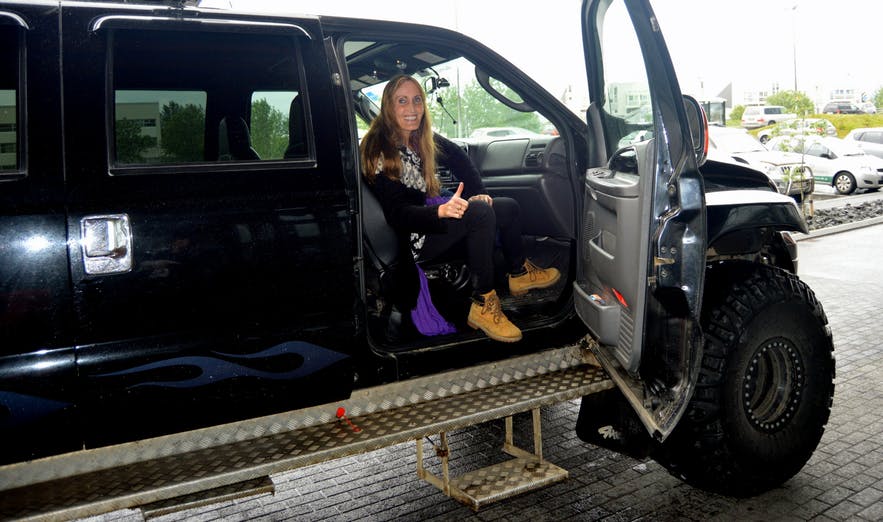 This super jeep is a modified Ford 350 EXXL Excursion extra long with 46 inches tires. I felt pampered in this awesome jeep, in my heated seat with Wifi and good music playing — visiting all the beautiful sights on the Silver Circle.

We drove to the west towards Borgarfjörður fjord, which is filled with Viking history and beautiful landscape. 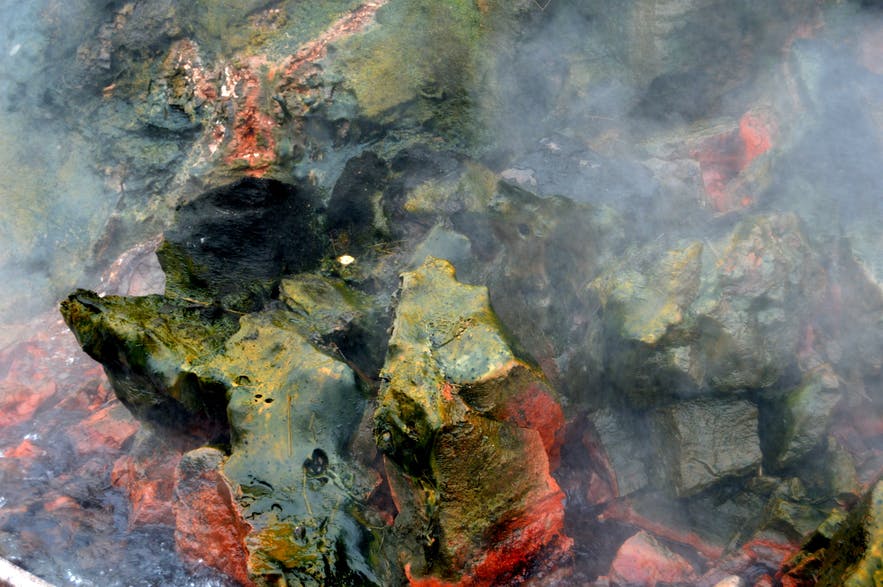 Our first stop was at the most powerful geothermal spring in Europe, Deildartunguhver hot spring. It provides 180 l/sec of 97° hot steaming and boiling water. There is a small fence in front of the hot spring, so people don’t burn themselves.

In the last couple of years, it seems as if Deildartunguhver has become even more powerful and it started spurting hot water up in the air much further than before, so cones had to be put up as well. But this is for our protection. 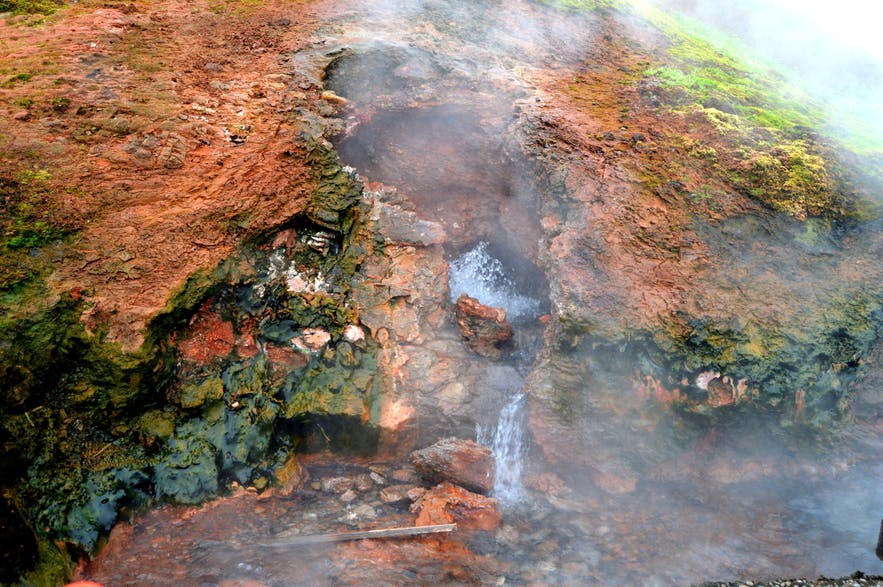 There is so much steam here that you can sometimes get lost in the steam. I love the colourful rocks in the hot spring; they are green and beautifully red and black. I always wait for the steam to go down a little so I can get a photo of the rocks.

Just recently (2018) the farmers of this area opened up geothermal baths, called Krauma, next to Deildartunguhver. 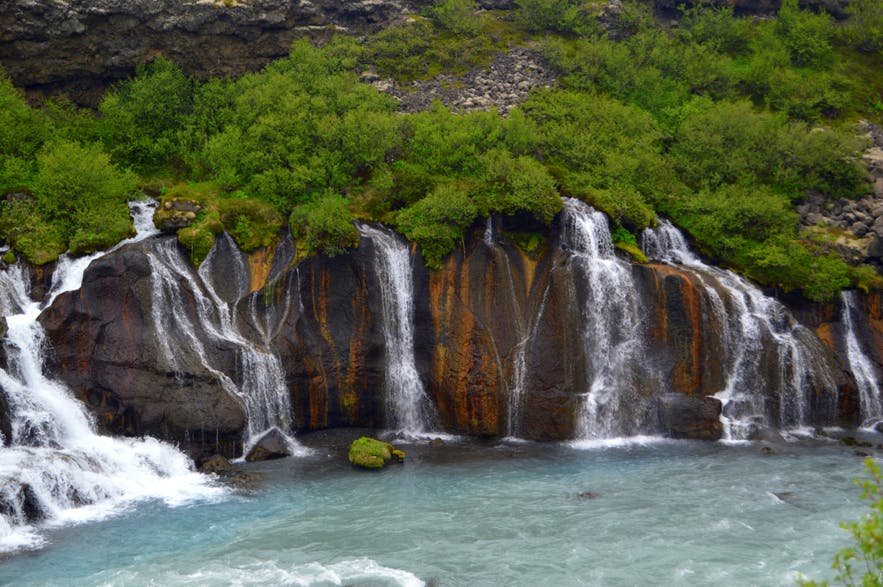 Our next stop was by Hraunfossar and Barnafoss waterfalls. Hraunfossar or Lava Falls are in the top 5 places on the list of my favourite waterfalls in Iceland. They are almost 1 km wide and consist of countless springs of clear subterranean water, which wells up from underneath the edge of the lava field Hallmundarhraun and runs in falls and rapids into the glacial river Hvítá in Borgarfjörður, which source is in Eiríksjökull glacier.

I have heard that these waterfalls are one of their kind in the world, so apart from their breathtaking beauty, they also seem to be a natural phenomenon. And there are so many ways to photograph them, like my photo above which shows a different angle of Hraunfossar than my photo below, which is shot from the more traditional angle. 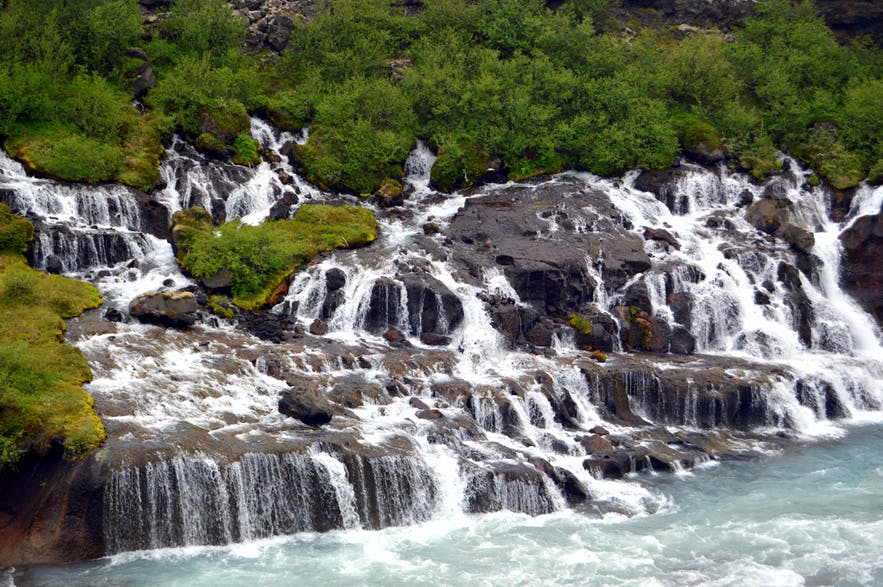 I remember back when I was a little girl travelling with my parents that we went down to the river and sat right next to the beautiful falls, but on the opposite side of the river.

Nowadays that path and many more paths have been fenced off as to protect nature. 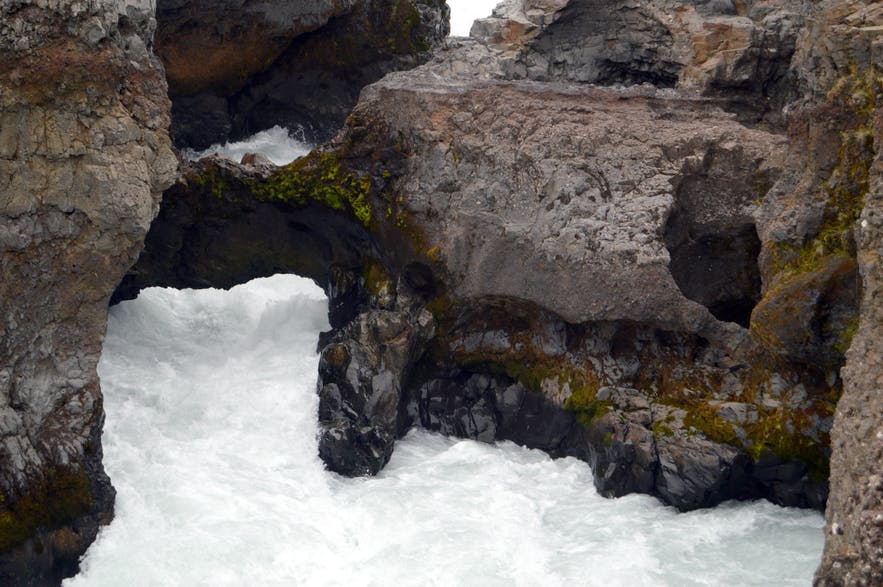 There is another waterfall almost next to Hraunfossar, called Barnafoss or Children’s Fall, as a great tragedy happened here when two boys drowned in the waterfall as they were crossing the river on the stone arch. When their mother found out what had happened, she had the stone arch destroyed.

By these falls one realises how forceful the glacial river Hvítá is where it runs in a narrow ravine and forces itself through a small stone arch in the river. It always scares me a little standing so close to such powerful forces of nature.

You can walk across the glacial river Hvítá on a pedestrian bridge called Barnafossbrú bridge to see the waterfall from a different angle. 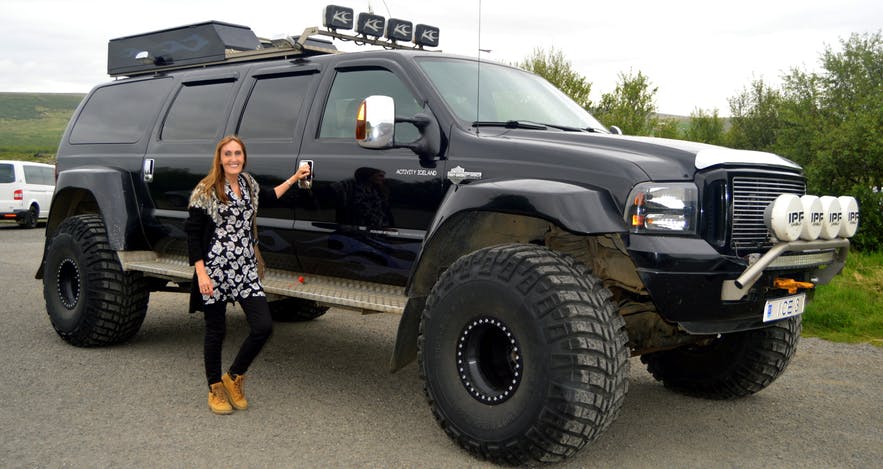 I was the first to return to the jeep and saw a group of Italians admiring it. They asked me to take a group photo of them by the jeep and were somewhat baffled when I opened the door of the jeep and sat in 😉

But I was just sitting down in the front seat, not the driver’s seat, that would have been more «cool» as it were 😉 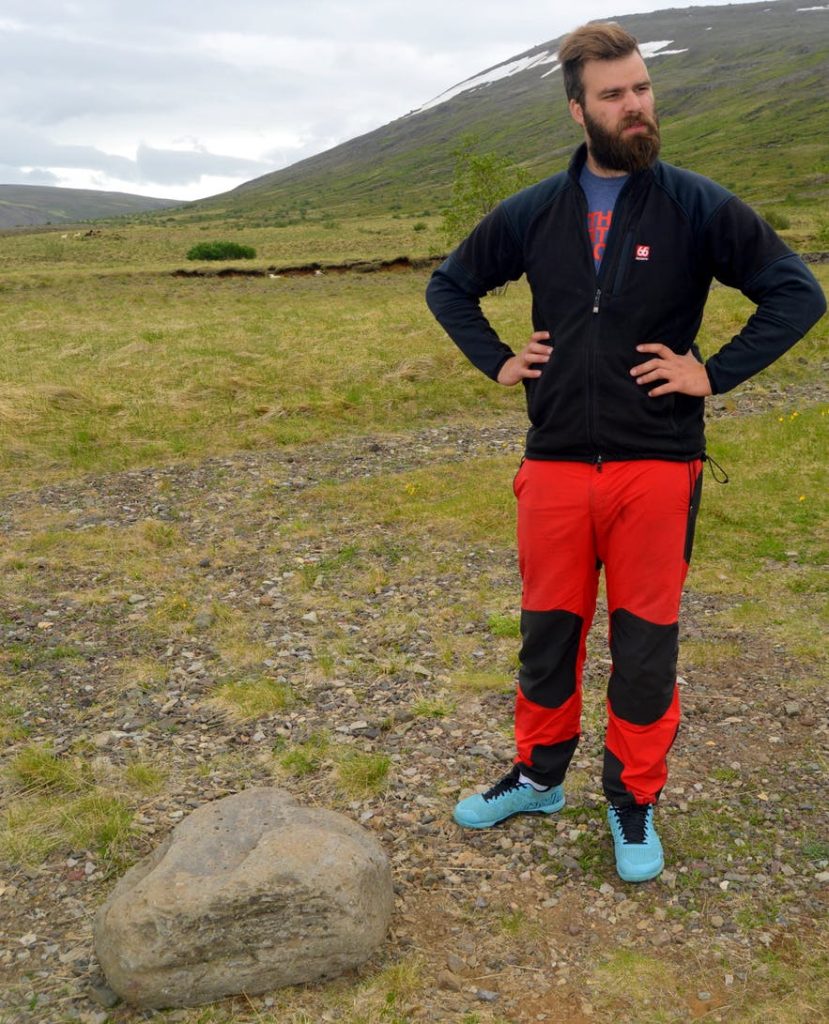 We now drove for a very short distance to have lunch at Húsafell woodlands. We were making a good time, so we stopped by the famous Kvíahella stone, also called the Húsafell’s Stone. It is a strength testing stone which weighs 186 kilos! It is difficult to get a good grip on this stone, let alone to carry out the 3 tests of strength.

The stone is located by a famous fold made of stone by the noted Reverend Snorri, for milking his sheep. The very strong Reverend Snorri lived in this area from 1756-1803 and was renowned for sorcery as he exercised ghosts sent towards him by his enemies.

The same kind of stone is used in the Strongest Man of Iceland competition. Do try to lift this stone and you will see how difficult it is! Our guide, Gísli, said that he had tried before without succeeding, and he was not going to try again, but two of our fellow travellers tried lifting it and gave in. 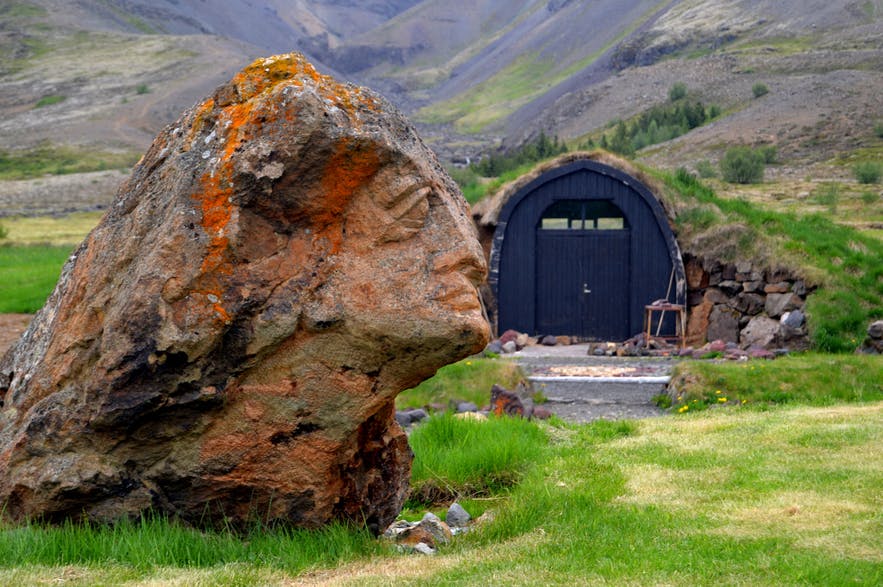 We also had a look at the wonderful work of art by Páll in Húsafell, but he is famous for beautifully carving faces in stone. Páll is a descendant of Reverend Snorri.

You can see Pál’s beautiful work in front of his workshop at Húsafell, and if you walk up to the Bæjargil ravine, you will see that many rocks in nature have got faces chiselled into them. Folklore tells us about a ghost in Bæjargil ravine, a man who allegedly hid his treasure there and has been visiting it after his death. He is small and dressed in a rust-brown or black parka. 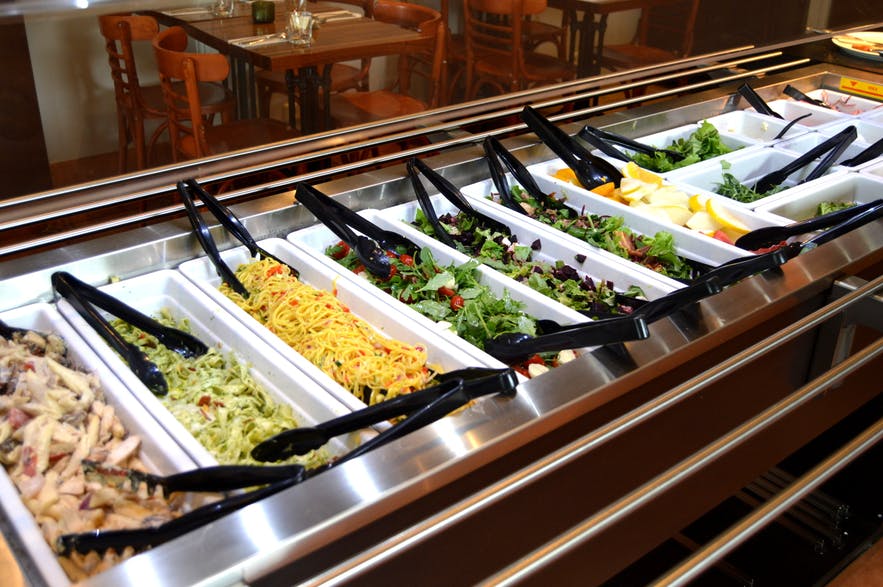 By now it was 12 o’clock and time for lunch. We had a lovely buffet at the restaurant in Húsafel Bistro and then off we went to Langjökull glacier.

It was so funny to see all the travellers at Húsafell taking photos of and by the super jeep — it really is something you don’t see every day on the roads in Iceland. And it was so awesome being driven around in it! 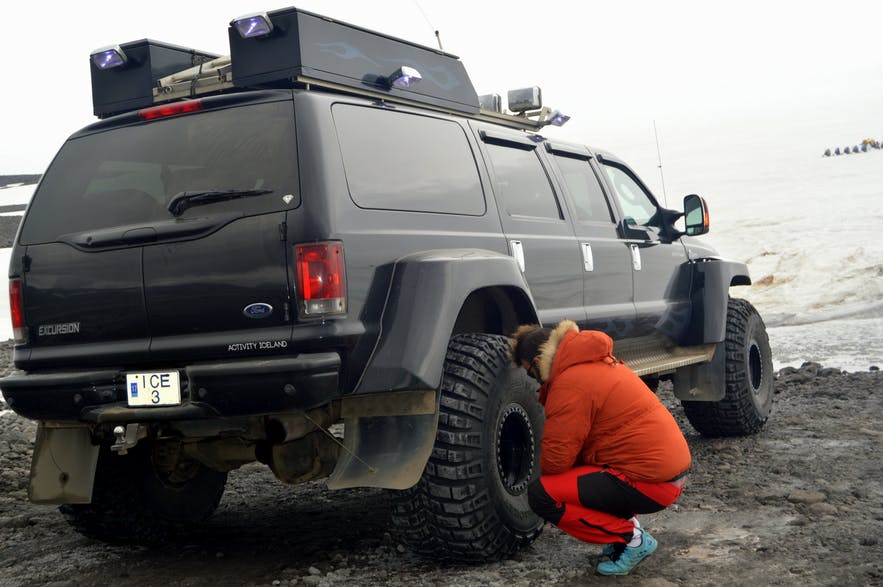 Shortly after Húsafell we left the main road and turned onto a really bumpy gravel road, which is a highland trail leading to Langjökull glacier, Iceland’s second largest glacier, and the new ice cave tunnel which I visited last year.

I have driven on this road in a bus and felt how bumpy this road was on the bus, but on the super jeep, it was a breeze. We crossed a river and up to the glacier we went.

Our driver and guide, Gísli, popped out to readjust the tire pressure so that the jeep could float on the glacier. 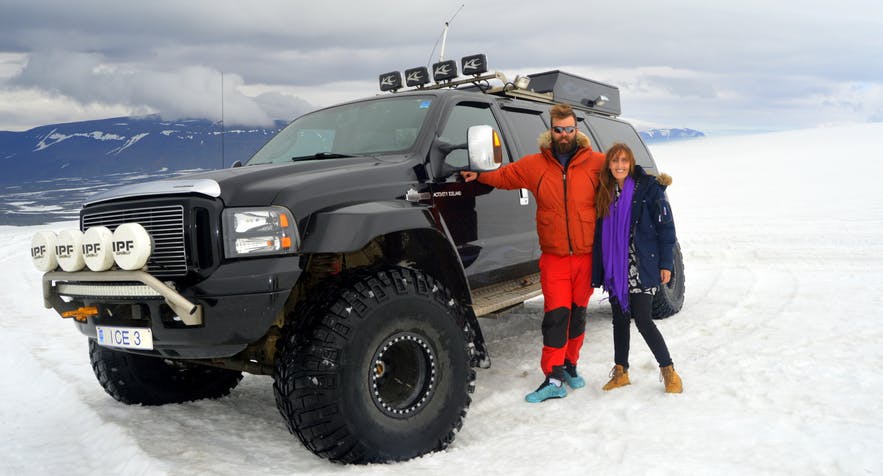 It was cold and windy on the glacier, so if you are going there bring gloves, a cap and sunglasses (all of which I forgot, hmm) as the reflection from the snow will make it difficult to keep the eyes open without sunglasses. I had my parka on and didn’t feel the cold even though I had forgotten all the above-mentioned gear.

Our guide was very experienced and knew his way around glaciers, so he did not let us wander off. There are deadly fissures in the glaciers, which too many people have fallen into and not all of them have come out alive. Even our guide has fallen into a glacier fissure once (not on this tour though, thank God). 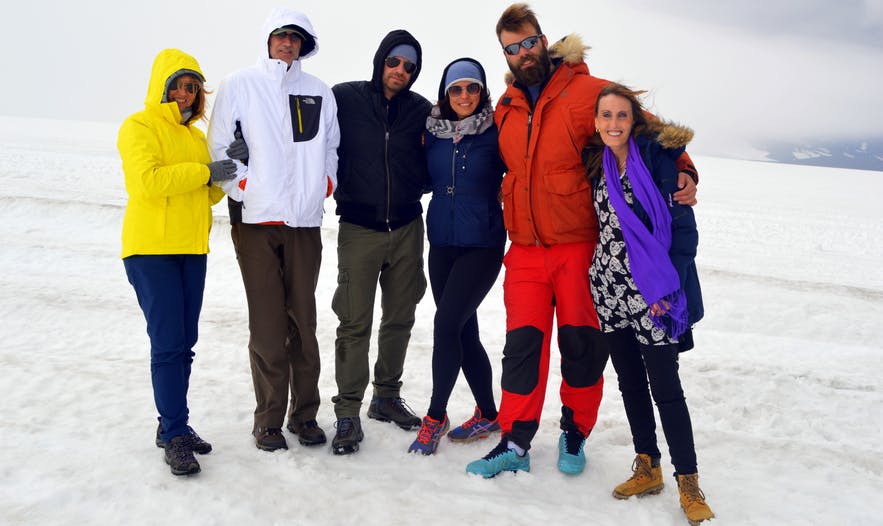 It must be such a horrible experience that I was happy to just stay by the jeep. But it was amazing standing on the glacier as we had excellent visibility and the sun even came out for a moment.

On our way up to the glacier, we passed jeeps and dog sledding and saw many people hiking towards the glacier. 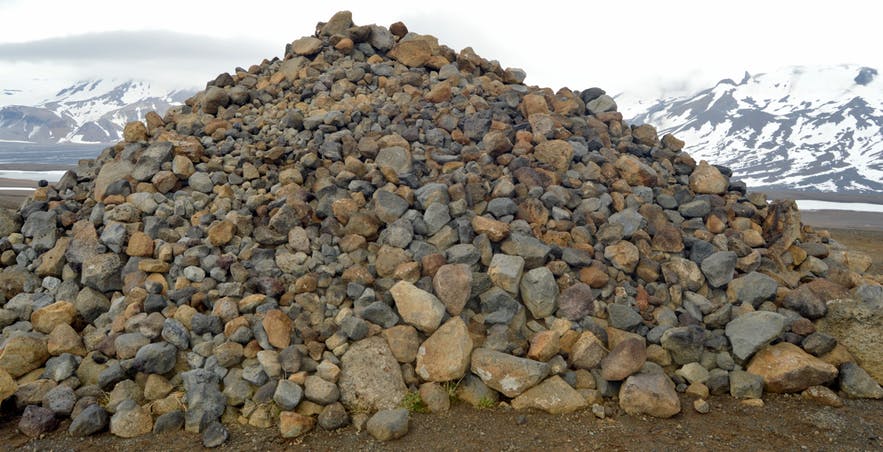 After spending a while on Langjökull glacier, we drove back to the road and drove on the Kaldidalur interior track which is the highest mountain road in Iceland. The name Kaldidalur means Cold Valley. We stopped by a massive cairn so that the guide could adjust the tire pressure again for it to be suitable for driving on roads.

If you want you can choose a rock which is bigger than your fist and place it on the cairn. I always place a rock there for luck. This pile of rock is located on the highest point on the Kaldadalsleið route, on Langahryggur, which is 727 m above sea level. These piles of rock or cairns are getting bigger and bigger now that more and more travellers are visiting the heaths.

From there we drove through Kaldidalur valley towards Þingvellir national park where you can see the tectonic plates above ground. Þingvellir is a truly remarkable place. Here the Vikings established a Parliament in 930 and because of that Þingvellir has been recognised by UNESCO as a cultural site connected to the Viking culture.

We made a stop here and had some coffee. We were then driven to the Nikulásargjá rift, which we Icelanders call Peningagjá or Money Rift, as here it is a custom to throw coins into the deep, water-filled rift and make a wish.

This is the only place I know of in Iceland where it is allowed to throw coins into a rift or anywhere else for that matter. I have seen coins thrown into hot springs and even Drekkingarhylur — Drowning Pool at Þingvellir, which is appalling.

To us Icelanders Þingvellir is a sacred place very close to our hearts, so let’s keep it unspoilt for future generations to enjoy 🙂 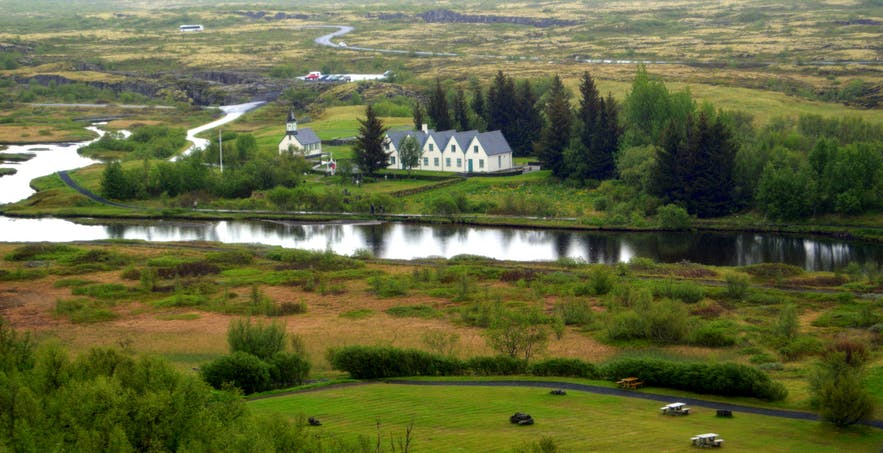 There were 4 Icelanders on board the super jeep so Gísli the guide trusted us to guide the remaining tourists through Þingvellir and Almannagjá rift.

He then drove up to Hakið, where we met up with him. From Hakið there is a breathtaking view of Þingvellir as you can see from my photo above. 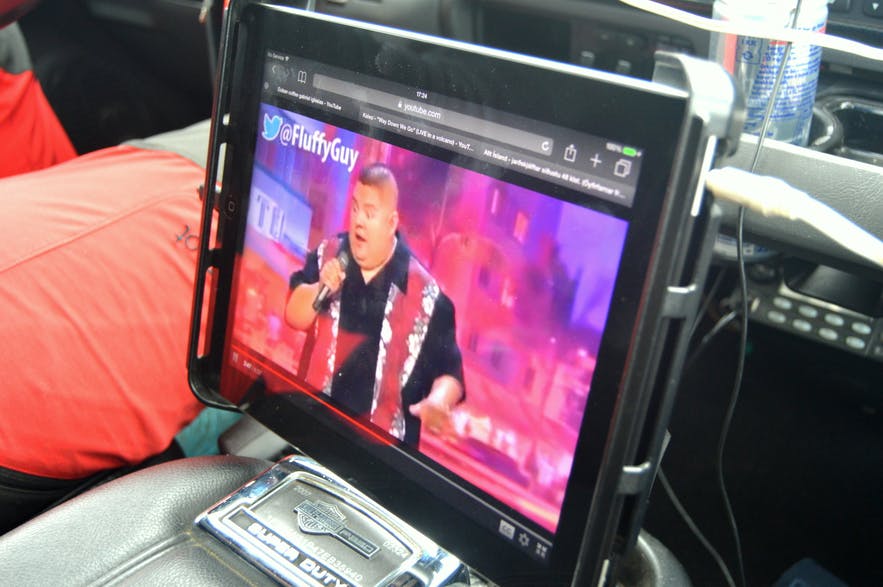 By now we had been on the road for 8 hours exploring the wonders of the Silver Circle. We had seen hot springs, beautiful waterfalls, stood on a glacier and visited a national park! On the way back to Reykjavík we watched a stand-up comedy show on Youtube on Gísli’s iPad, thanks to the Wifi in the super jeep. I felt so pampered and relaxed.

This tour covers so many sights in Iceland, and I thoroughly enjoyed exploring them in this awesome super jeep with Activity Iceland! 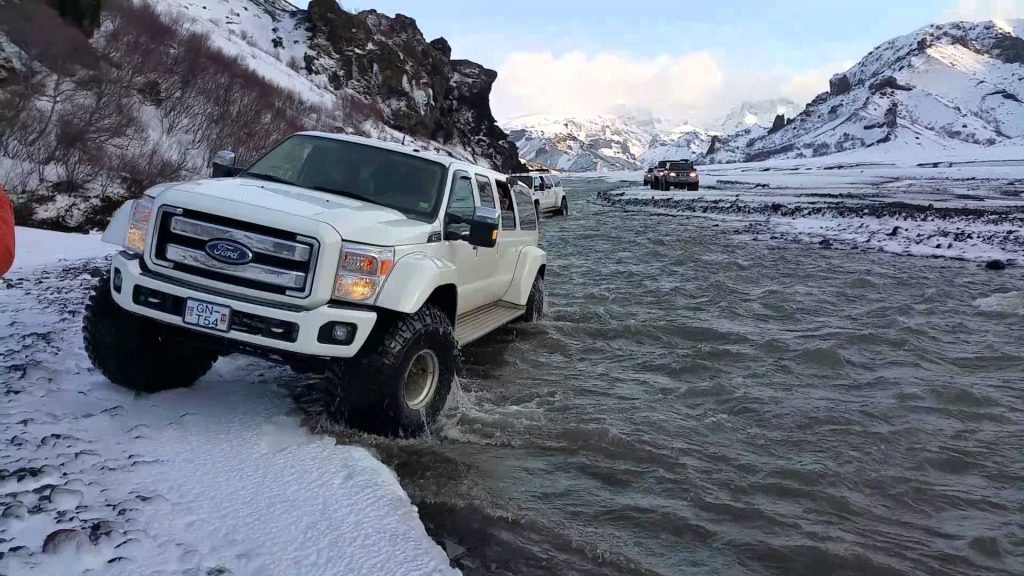 DESCENT INSIDE THE ICELANDIC VOLCANO