Go to the Burj al Arab: The World’s Most Luxurious Hotel

I’m not a girl who dreams about hotels… 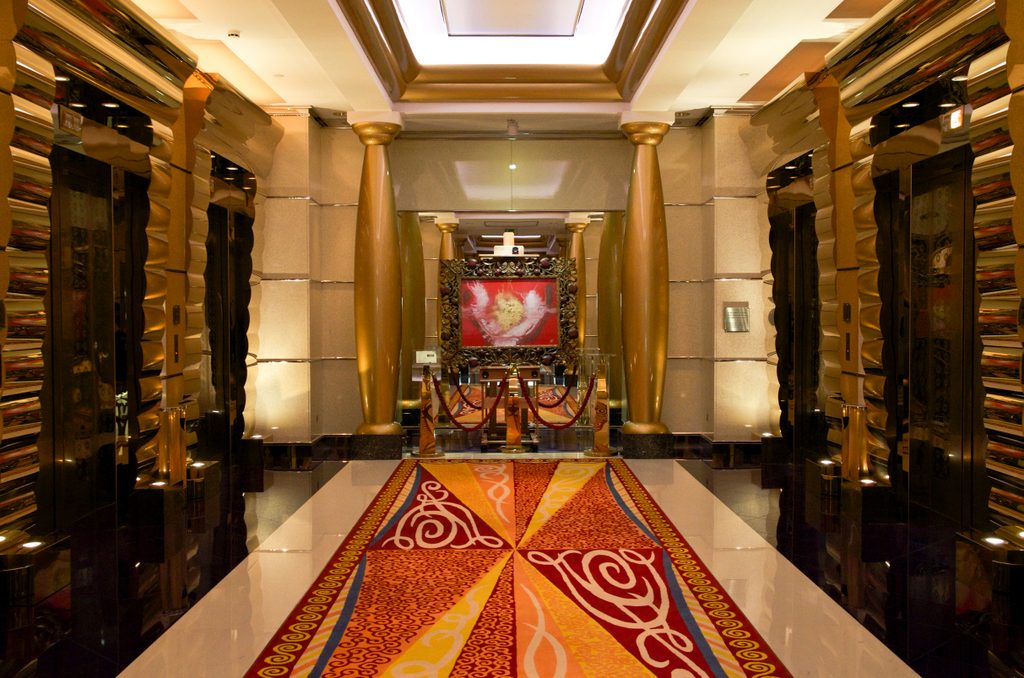 I have some friends who work in the luxury hotel industry and they wax poetic about hotels they dream of visiting someday — hotels with plunge pools overlooking mountains, glass-bottomed overwater bungalows and 50,000 thread count sheets.

Me? I get their fascination, but hotels aren’t my thing, and they don’t dominate my travel dreams… 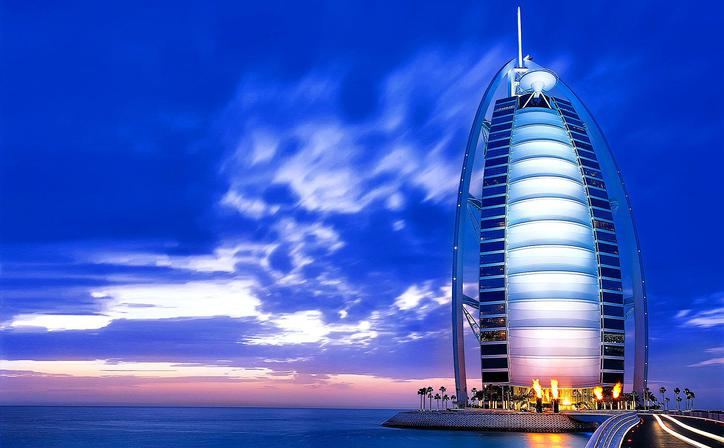 The Burj al Arab is one of Dubai’s most famous landmarks, its sailboat-shaped silhouette emerging from the sea.

The hotel, which opened in 1999, declared itself the world’s first seven-star hotel — even though that rating technically doesn’t exist. It is over-the-top in every way possible.

From the first time I saw a picture of the Burj al Arab, I dreamed of visiting it. But the hostel is closed to visitors, and there’s no way in hell I could ever afford to stay there.

This is where being a professional travel blogger comes in. I emailed the resort and asked if I could drop by for a visit.

Not only did they give me permission to visit, they offered to show me around! 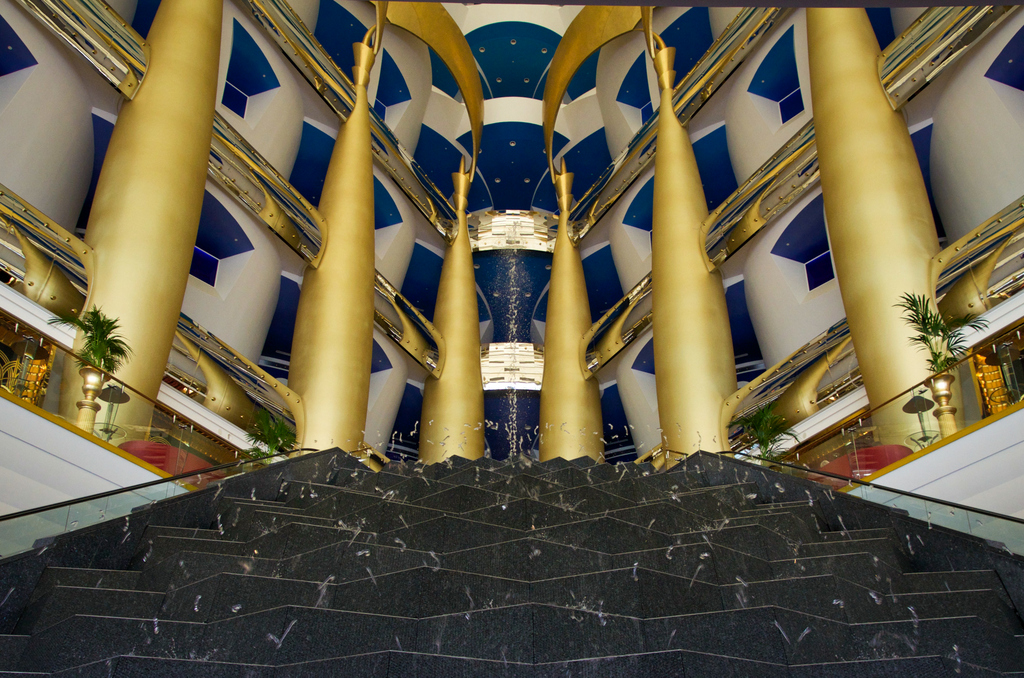 The lobby impressed me right off the bat with enormous gold pillars and dancing fountains. 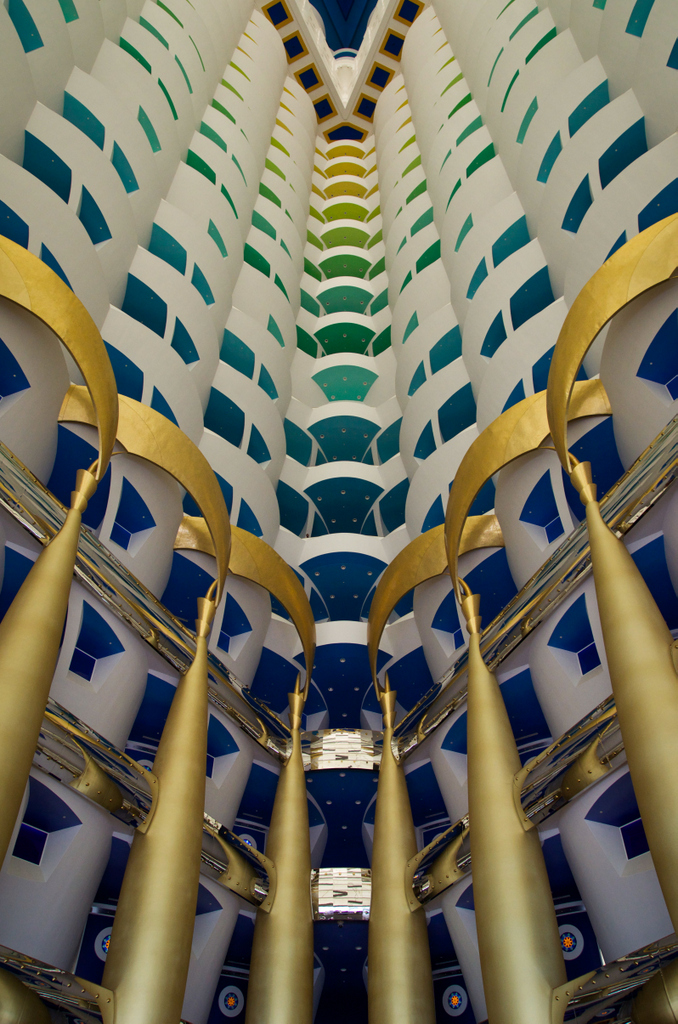 The honeycomb-style grid is very rare in hotels, and here it was an amazing design element. This hotel is all about breathtaking grandeur.

After being greeted by the Burj’s PR team, it was time to do what I’ve always wanted: 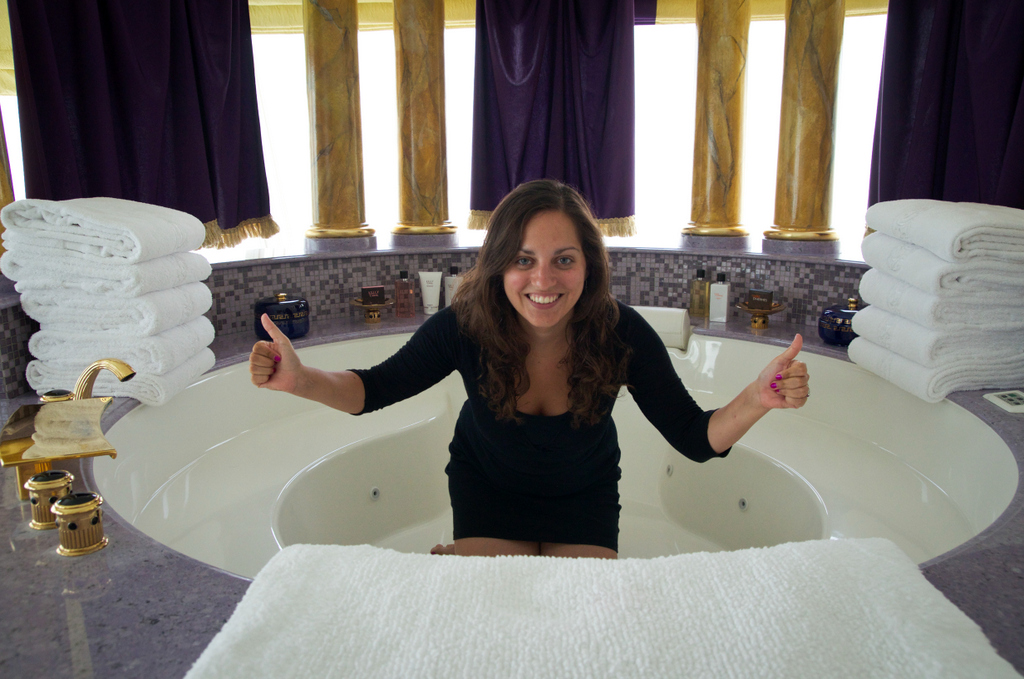 CNN named the Burj al Arab’s Royal Suite the 12th most expensive hotel suite in the world in 2012 with a nightly rate of around $18,716.

The Royal Suite was actually booked during our visit, despite it being the lowest point of low season (Ramadan plus the middle of the summer). Instead, we went to see one of their #2 suites. 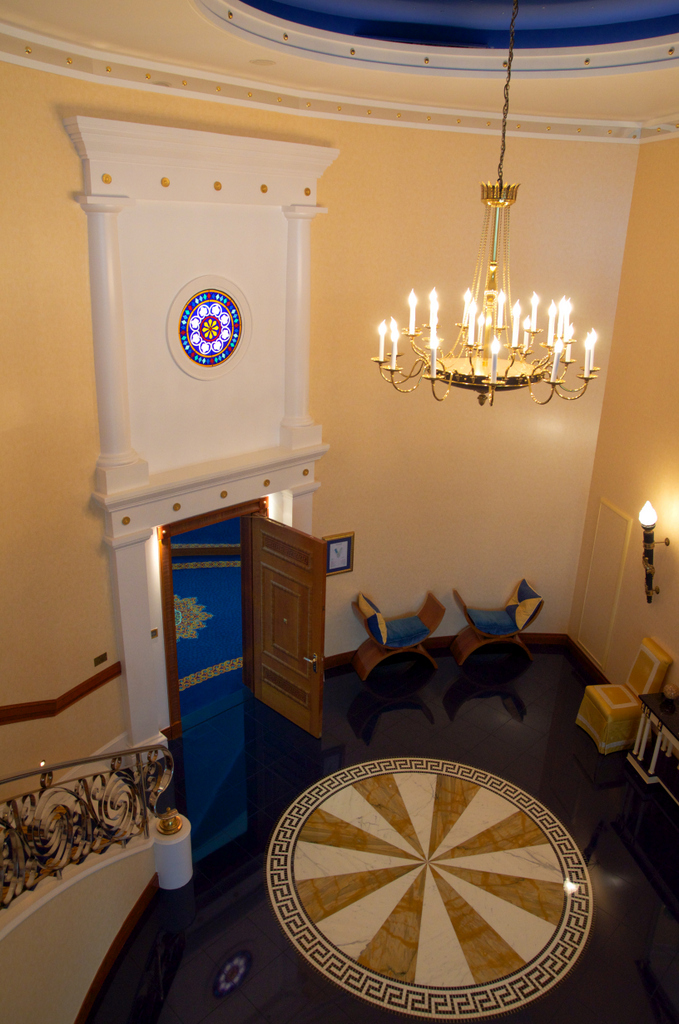 It starts with a grand foyer… 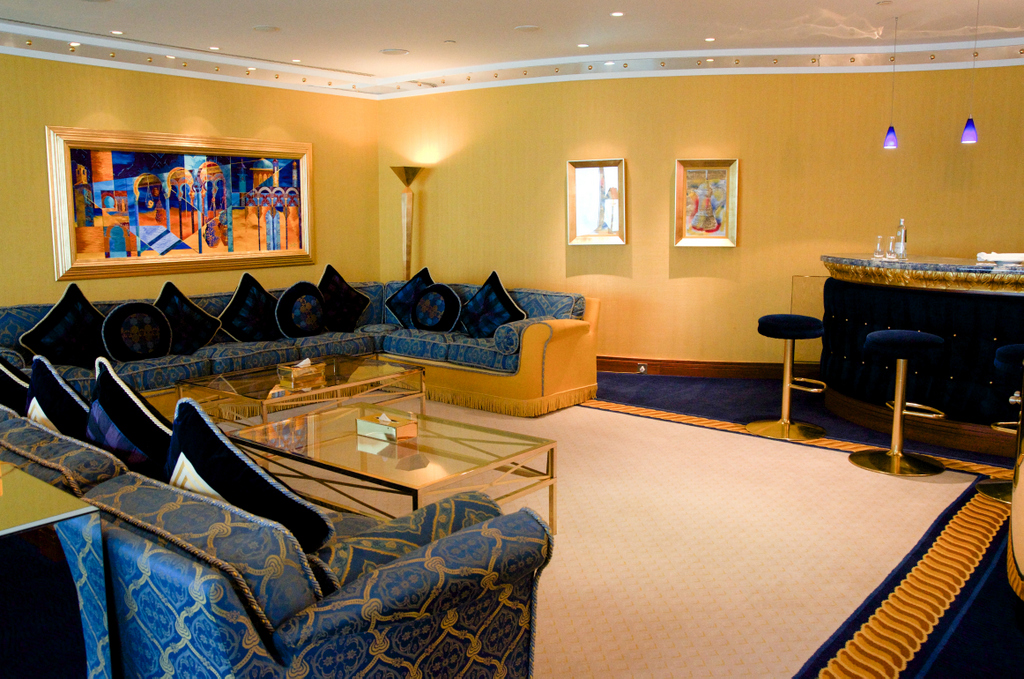 And merges into multiple sitting rooms with many bars, adjoined to offices complete with Mac desktops. The suite has two ensuite bedrooms. 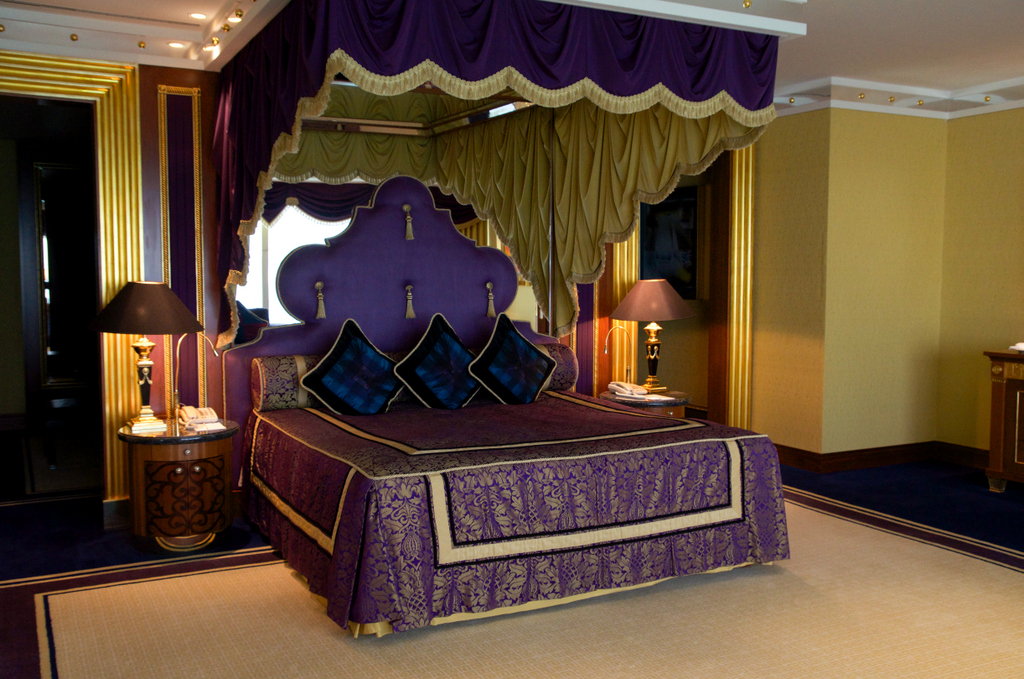 I can’t tell you how hard it was not to jump on that bed.

And the master bath: 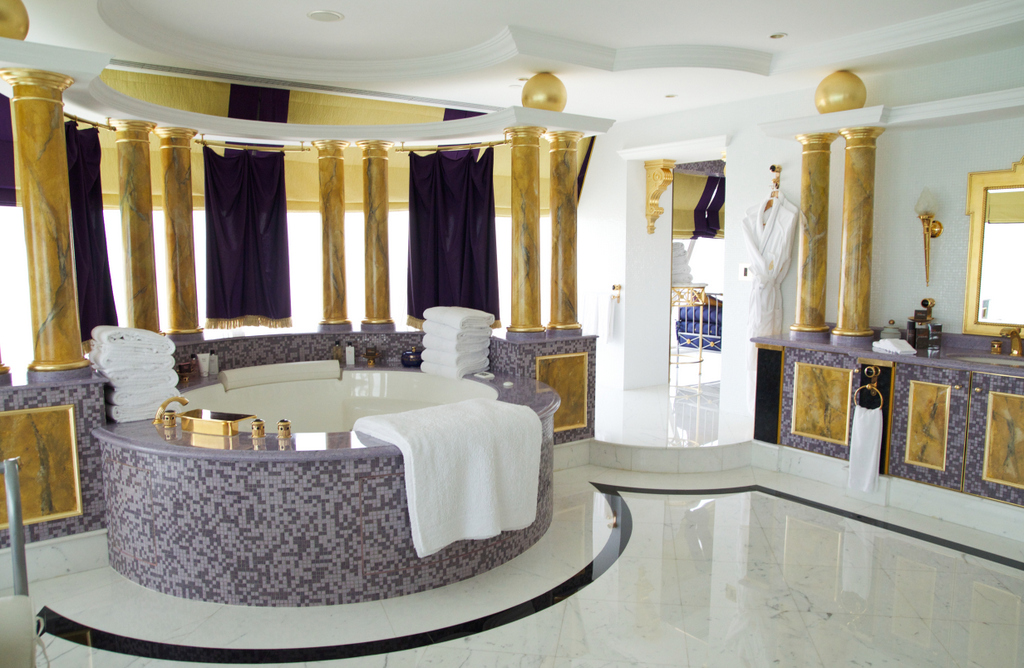 How much would you love for this to be your bathroom?! Look at the size of that tub!

One reader remarked to me that the Burj would be more toward the taste of Eastern tourists with its penchant for gold-dripped anything. Well, I’m a Leo — in my opinion, you can’t have too much gold!

But it’s true that gold does tend to reflect the design aesthetic of the up-and-coming billionaire regions of the world like China, India, and Russia. Years ago, the Burj al Arab catered foremost to wealthy American tourists, we were told. In time, however, their customer base has shifted toward wealthy Russians and Chinese.

You don’t get a lot of presidents or royalty staying here — it tends to be the super-rich rather than the super-powerful. 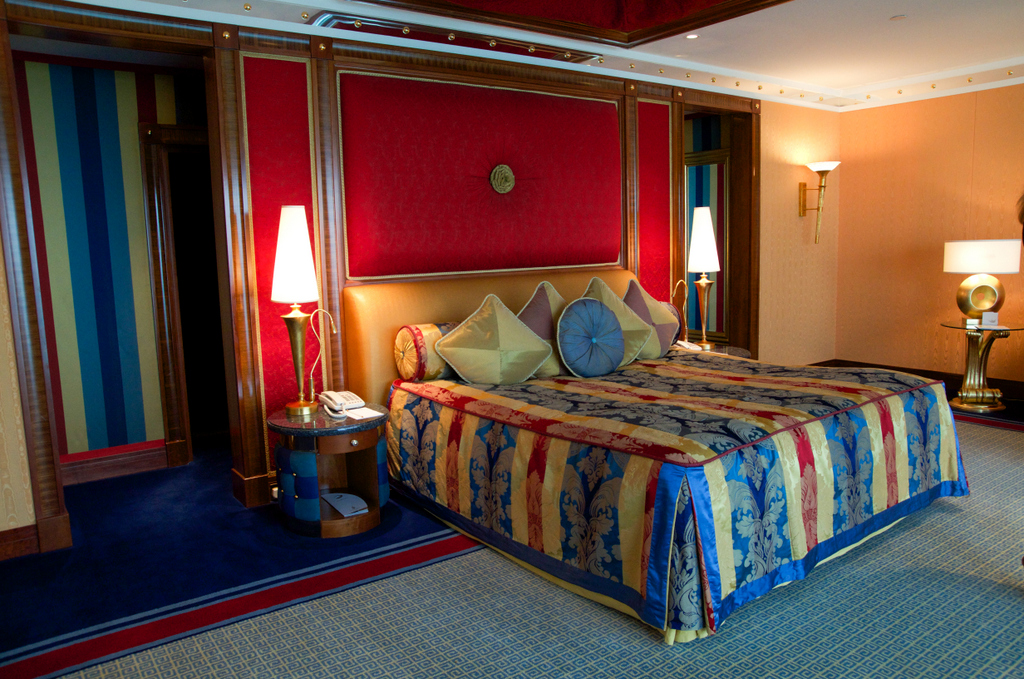 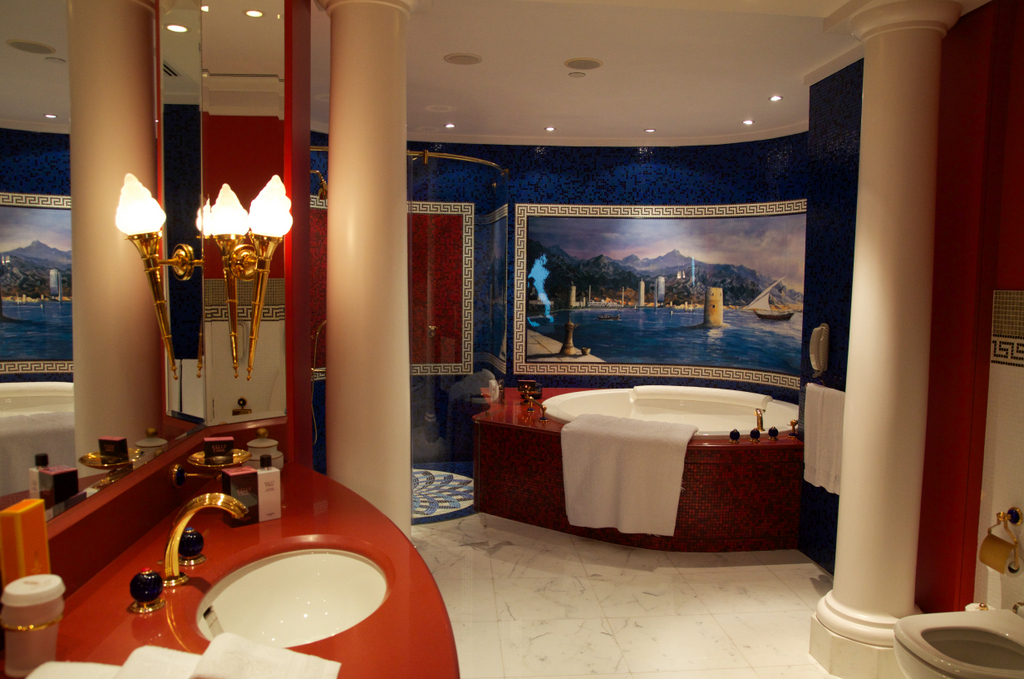 And the guest bathroom! How would you like a mosaic on your bathroom wall? 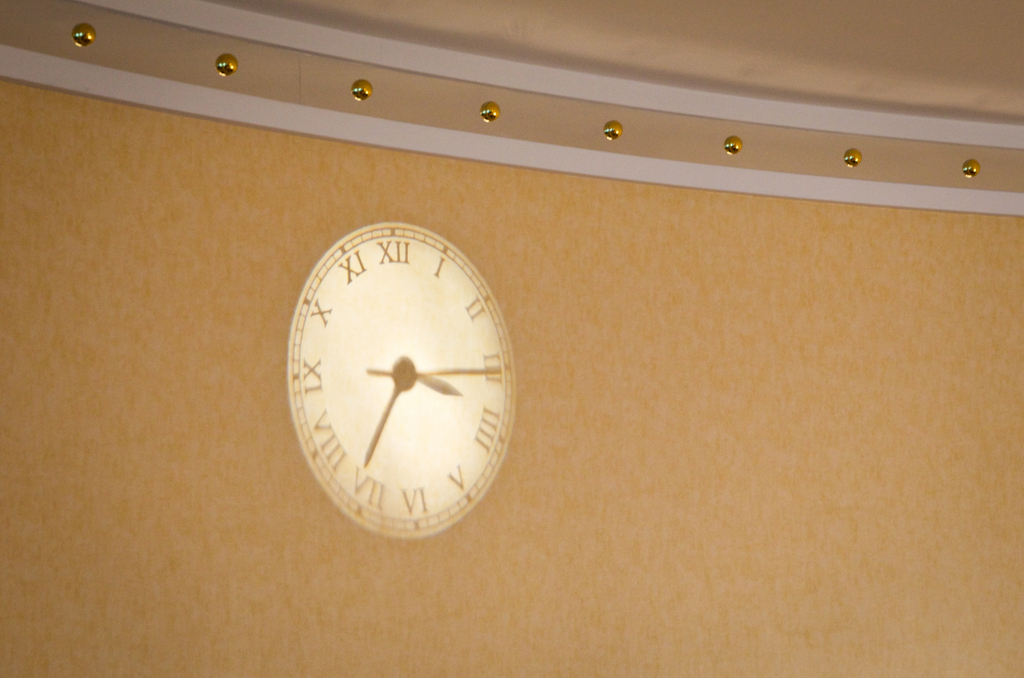 I remarked that I really liked the shadow clock that was projected onto the wall. Turns out these clocks were such popular items that the Burj began selling them to their guests!

After leaving the suite, we went to the spa floor, where you’ll be able to take the best picture of the Burj al Arab: 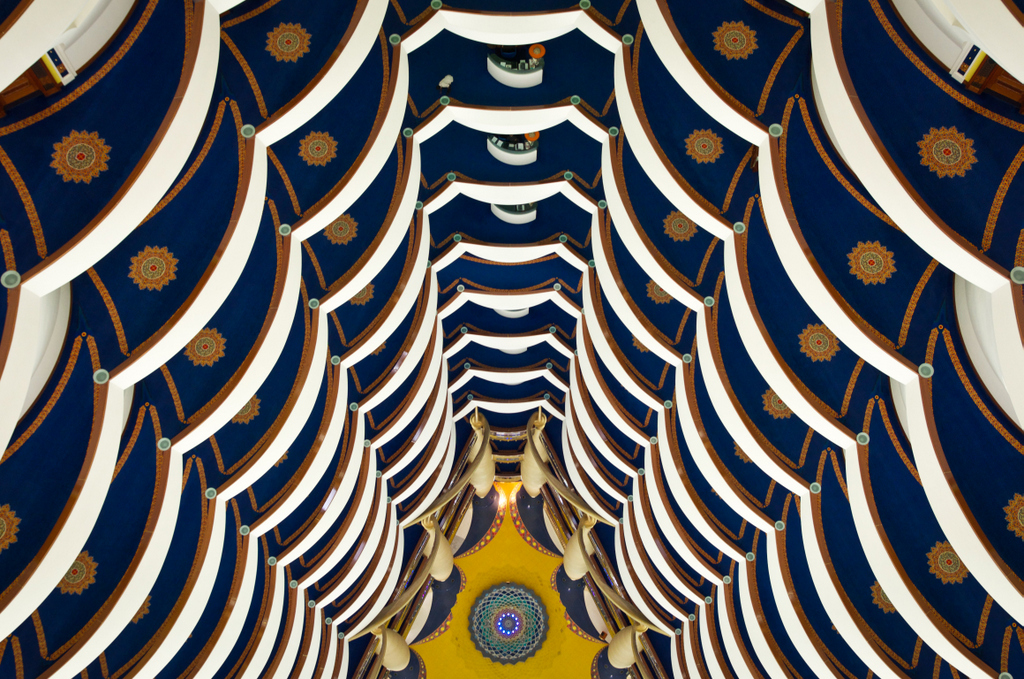 To get here, take the elevator to the spa floor and walk around the perimeter to the lobby. Stand next to the white piano and you’ll be in the perfect position. 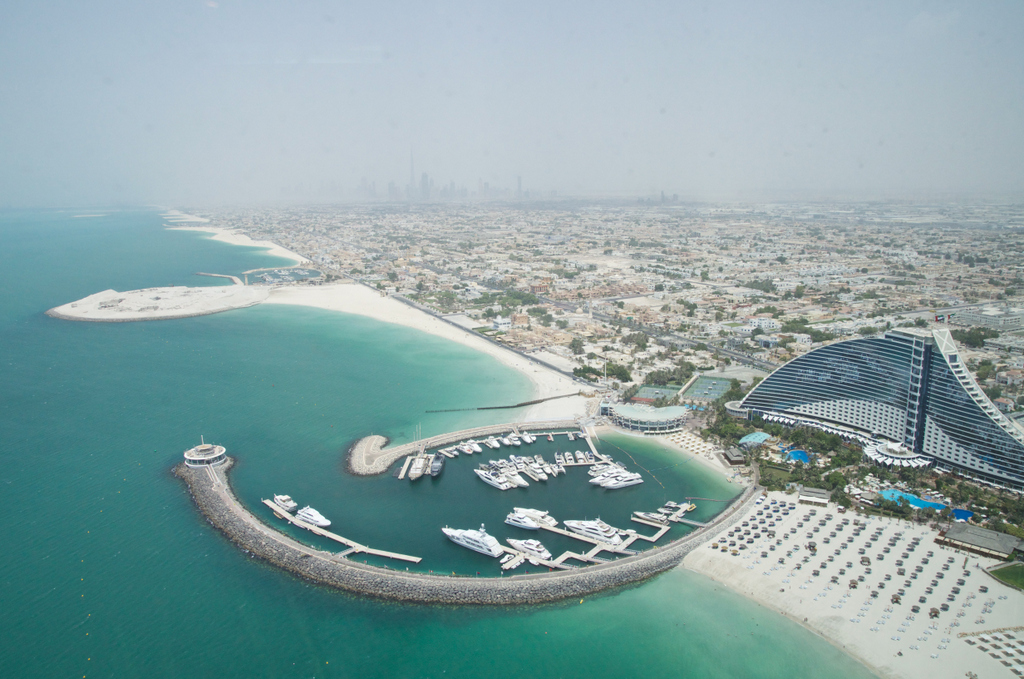 The Burj’s PR team also generously invited me to experience their Sky Tea afternoon tea in the Skyview Bar on the 27th floor, overlooking the coastline with a view of the Burj Khalifa in the far distance.

I started my tea with something I had never tried before: sparkling date juice. “You won’t believe where this is made,” our waiter told me.

“France,” he said with a grin.

“Yes, they make it there. The dates are from the Middle East, though.”

After the sparkling date juice, they brought a pot of tea and a cappuccino and treated to the following courses: 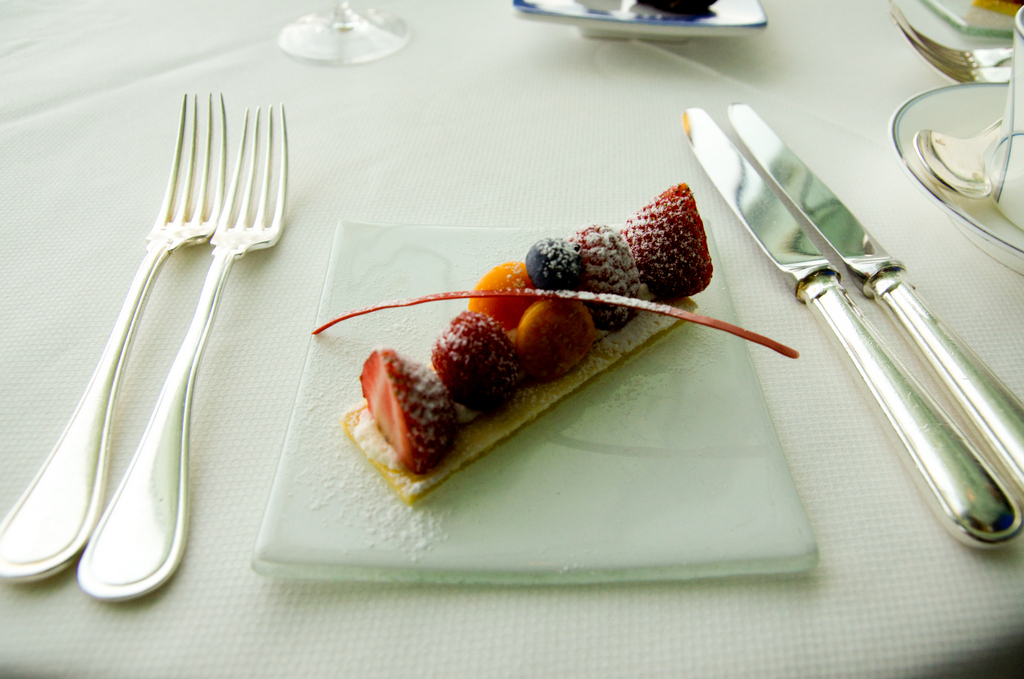 Berry tarte — a light start for what was ahead. 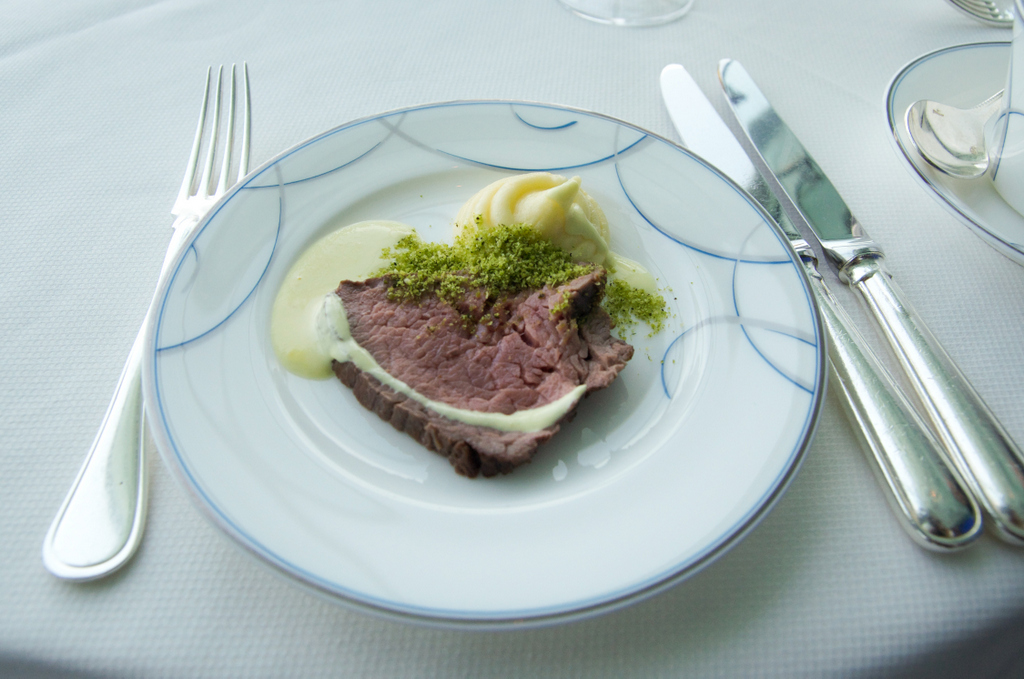 Chef’s carvery of the day: roast beef with mashed potatoes. This was sensational, and I could have easily had one or two more servings. 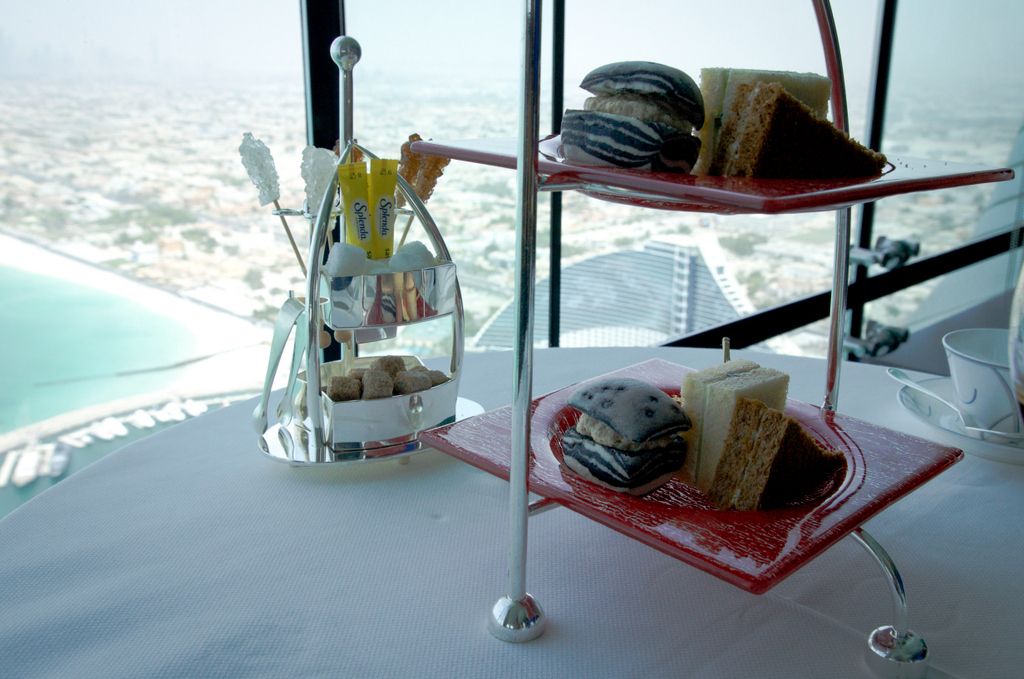 Sandwiches galore. That zebra-looking bread is actually made of squid ink and pureed apples! Incredible. (And there are free refills on the sandwiches, so to speak.) 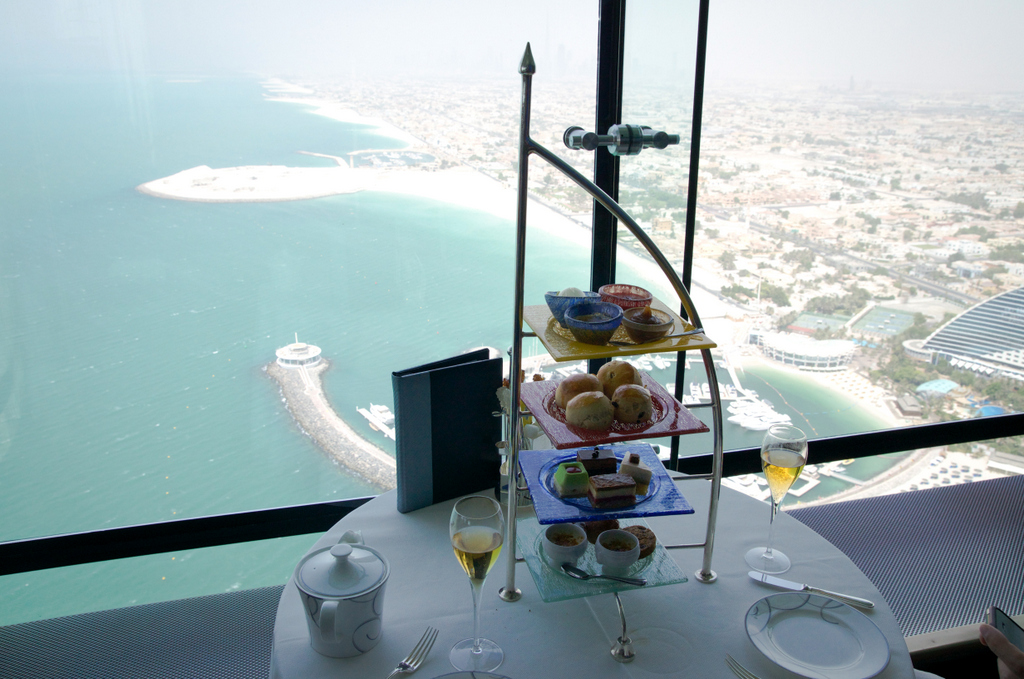 And then it was time for tower of desserts in a tray shaped like the Burj al Arab itself!

Starting from top to bottom, I began with the absolute best scones and clotted cream I’ve ever had (and having lived a year and a half in the UK, that is a HUGE deal). Next, a selection of cakes.

The best item on the menu was the sweetest dish of all: camel milk creme brûlée. By that point, though, I had eaten so much that I was struggling to get through my final delicious bites. 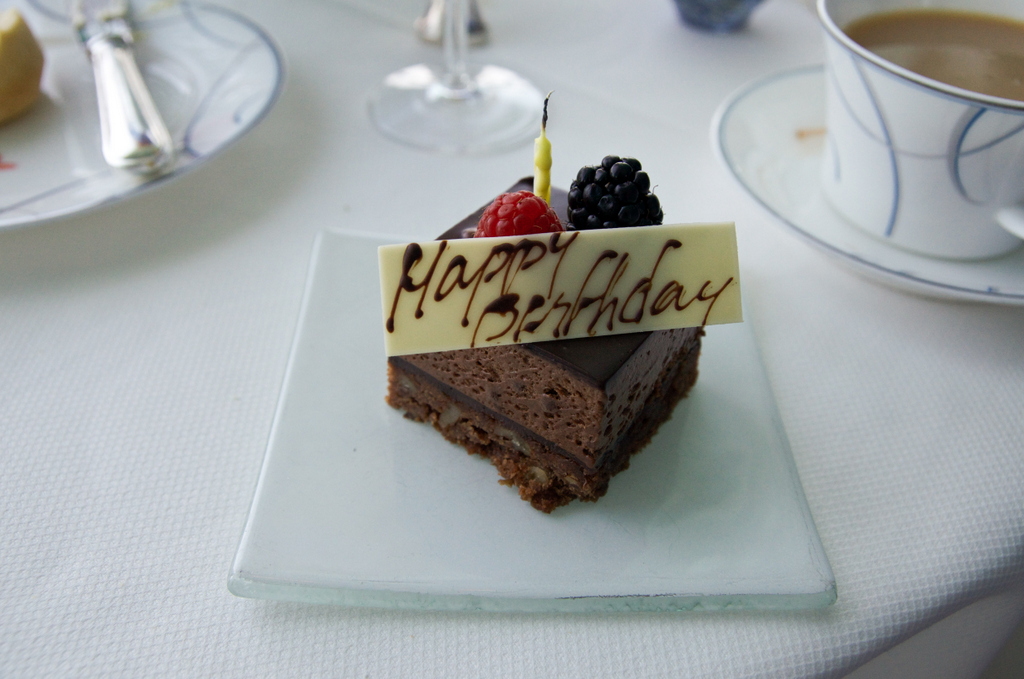 A birthday cake! A sweet way to add to the occasion. 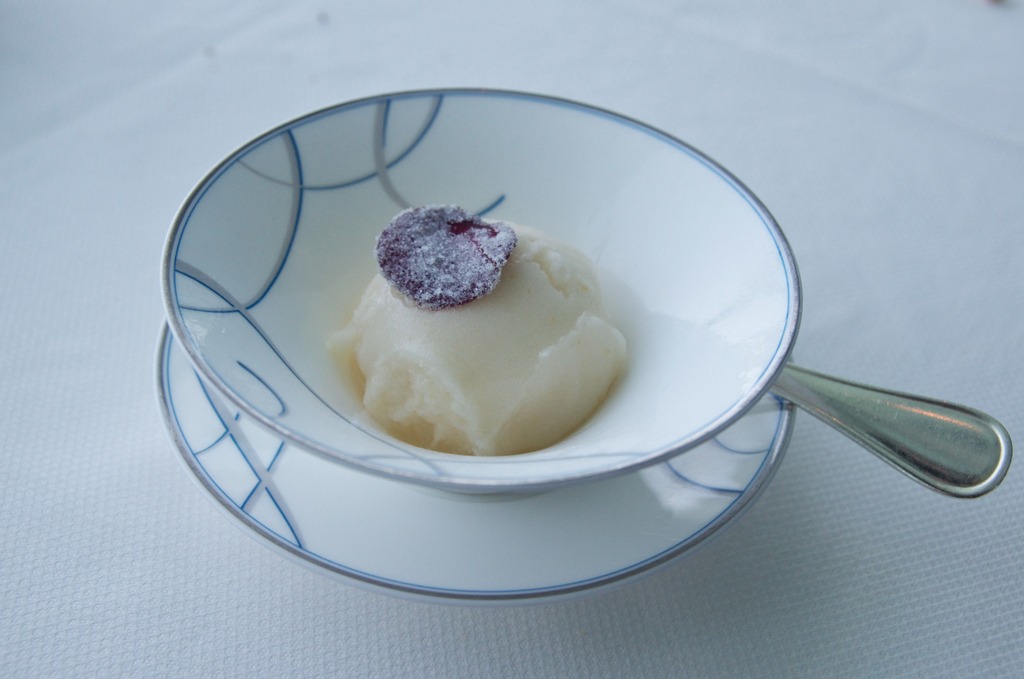 And finally, the dish that almost made us burst — lychee and rose sorbet.

I was DONE. Stuffed, sated, and absolutely full of sugar. 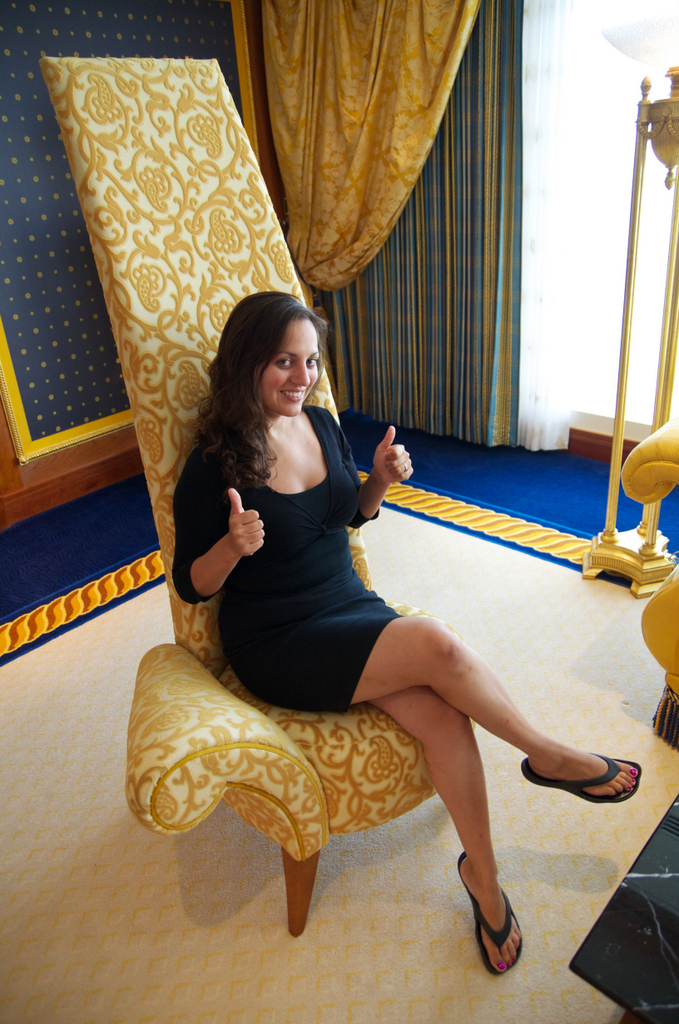